Every year bike show season comes around and we start to daydream about new bikes or pieces of kit however, in the last 2 years, we have missed out due to the global pandemic.  The last show I went to before everything hit the fan was EICMA 2019, it was my first visit to Milan, and the show and I thoroughly enjoyed it, so when the opportunity came around again I jumped at it.

Standing in Alicante airport with flight tickets in hand, passport and extra Covid related paperwork, I did wonder if it was a good idea, especially as I would be flying to the USA 2 days after I got back, but I was really excited at the thought of being at a bike show again and had a list of new bikes that I wanted to see.

The flight was soon over and I headed for the train into Milan, initially standing on the wrong platform and watching as the Milan Express set off without me, I sorted myself out and waited for the next one, they are fairly regular. Around 45 minutes later I stepped out of the station into Milan and headed for the metro to take the short journey to Piazza Del Duomo, for sightseeing and my hotel for the night.  The metro is easy, you can buy single tickets or a 3-day pass, I opted for the former as I wanted to walk as much as possible to see the sights.

After shooting some footage around the Piazza I checked into my hotel before heading to Navigli for dinner by the canal.

The following morning after a rather expensive breakfast in a cafe I headed back onto the underground for the 30 minute-ish ride out to RHO Fiera and the 2021 show.  I had had to jump through a couple of extra hoops to attend the event, namely a Covid test to enter Italy and a Covid certificate to gain entry but no big deal really and obviously the wearing of face masks was mandatory, not a problem either.

I was quite surprised by the number of people waiting to get in, it was fairly organised but it was the first public day and I was early and the queues were quite large.  Once inside the throng dispersed quite quickly into the huge halls and for the most part, it was Ok with only occasional bottlenecks to avoid.  All of the stands had hand sanitiser and signs reminding you to wear masks and socially distance, were everywhere.

The Yamaha stand was completely blocked off with a queuing system and limited numbers allowed to enter, some others had fewer bikes on display to allow more space and it worked very well.

Stopping off at the Merlin Bike Gear stand for a chat with Emily was a welcome break, thanks for the coffee, sorry I didn't take a picture. A little later whilst looking around the Suzuki stand at the new GSX-s 1000 GT, it's lovely by the way, I bumped into Markus from Pazzo Racing in Canada who I occasionally ride with at home in Spain.  We stopped for a couple of beers before I set off again around the last hall and packed up for the day.

All in all a great trip if a little short, maybe 2 days at the show next year would be better or a press pass to avoid the crowds completely, but then you loose the atmosphere.

Give the video a watch and tell me what you think. 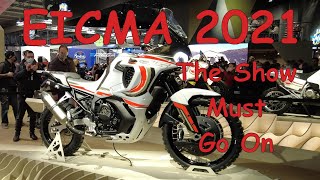 Transfer money the easy way with WISE. Click below for a free €500 transfer.